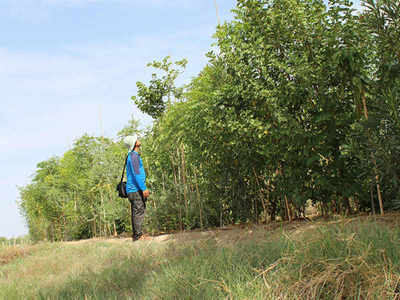 The Greater Chennai Corporation has changed a dumpyard close to the Kotturpuram railway station, which had been a blemish to the public, into a green zone.

Community authorities of the Adyar zone have made a small backwoods out of the empty plot of land situated along Canal Bank Road on the eastern side of the Mass Rapid Transit System (MRTS) railway station in Kotturpuram.

An inhabitant of Kotturpuram said the empty plot, prompting the underground vehicle leave, had gradually become a spot for unloading development garbage. Throughout the long term, inhabitants along Canal Bank Road had likewise begun unloading trash there.

Also, clients from the close by alcohol shops utilized the land as a public latrine. Drivers and occupants found the dumpsite a blemish, and requested of the community authorities to find a way to stop the unloading of waste there.

Alby John Varghese, Regional Deputy Commissioner (South), Chennai Corporation, said various grumblings were gotten from the inhabitants of Kotturpuram about the abuse of the empty plot.

“After a visit to the site, the civic body tried to prevent the dumping of waste by putting a warning noticeboard, but still the dumping of debris continued. Then we conceived of the idea to turn the vacant plot into a green zone using the Miyawaki method. The vacant plot was ring fenced and the construction debris was removed and replaced by more than four feet of fresh earth,” he said.

The greening project, which was initiated by Corporation Commissioner G. Prakash in February this year, has in excess of 2,000 tree saplings spread more than 30,000 feet.

Despite the fact that the scaled down timberland is shut for public review at present, the community body intends to open it up for the public once the saplings are all around developed and after a pathway has been cleared.